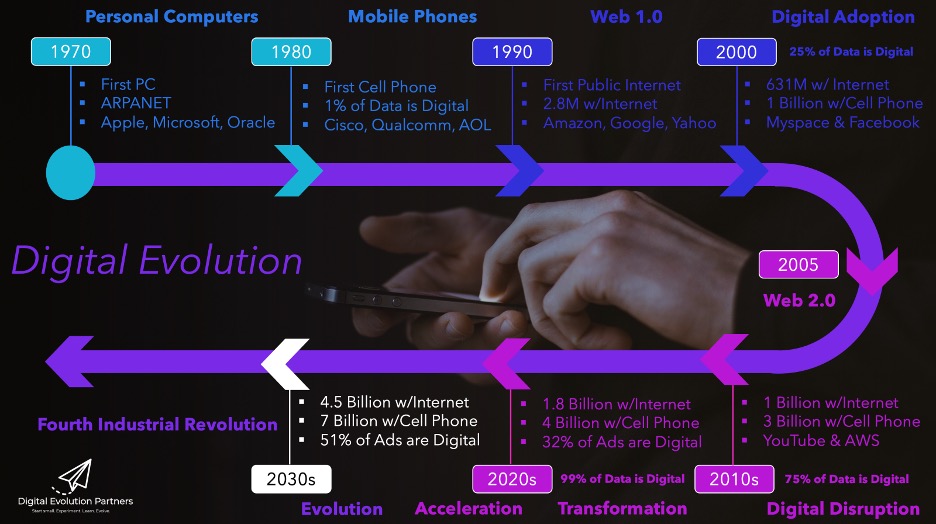 The Next Digital Evolution: Building Trust in a Digital-First World

The rise of digital technology and the period of Web 1.0 that followed in the 1990s was, at least in part, the results of these four foundational digital innovations converging and starting to transform the world. Amazon, Google, and Apple were founded in the ‘90s; in the 2000s came Facebook; and 2005 was the transformational turning point of the third industrial revolution: Web 2.0 began with 1 billion on the internet, 3 billion with mobile phones, and the advent of the cloud which created new businesses like Netflix’s streaming platform that still runs on Amazon Web Services (AWS).

For a more in-depth look at how the rise of digital began and evolved, check out this graphic.

As Stan Lee wrote and illustrated in his 1962 Spiderman comic, “With great power comes great responsibility.” A brave new digital world began in the ‘90s, the bubble burst in 2000, and by 2005 the third industrial revolution changed the world forever. Multiple trillion-dollar market cap companies were created: Amazon and Apple in 2018, Microsoft in 2019, and Google in 2020. But with all that digital data and all that power were brands heeding the advice of Spiderman’s Uncle Ben Parker? Were they taking responsibility, and acting responsibly and in the best interest of the users from whom they were taking data?

“Love all, trust a few, do wrong to none.” – William Shakespeare, All’s Well That Ends Well

Five years after the start of Web 2.0, trust in brands that misused digital data started to erode and, in many respects, has yet to be restored. Governments stepped in. New privacy laws quickly followed, with the promise of more to come. The European Union (EU) General Data Protection Regulation (GDPR) was adopted in 2016 and become enforceable in 2018. The California Consumer Privacy Act (CCPA) was signed into law in 2019 and become effective in 2020. Following these regulatory actions, consumers quickly saw updated and extremely complicated, technical privacy policies – legal jargon they had to comply with to transact digitally with brands. Confusing pop-ups emerged on websites asking consumers to accept or deny different types of cookies. In April 2021, Apple announced App Tracking Transparency (ATT) enabling users to decide if they wanted apps to track their activity across other companies’ apps. Finally, in June 2021, Google announced that they would stop tracking consumers using cookies in their Chrome browser – first setting a deadline of early 2022 and later pushing out that deadline to 2024.

The Next Era of Digital Evolution

Brands that can both harness the power of digital – and prove they are among the few trusted stewards of digital data – will become the brands that thrive in the next digital evolution era where trust and transparency is the new battleground.

It is no longer enough to take a risk-based approach to data privacy; brands must openly take responsibility using a value-driven approach to building trust and transparency. In 2018, Apple said “Privacy is a fundamental human right” on its Q2 earnings call, later elaborating that “it is also one of our core values. Which is why we design our products and service to protect it.” Apple’s privacy product innovations that followed would be a significant disruption to the industry and have since ignited new urgency for more brands to take on more responsibility.

Here are some ways to start that process:

What if you thought of privacy as a product you provided to your customers. What products would you offer and what value would you provide? Each product may have its own agreement with consumers that highlight the value exchange, in simple layman’s terms, between the brand and the consumer. Each product would have a product manager and team. Products could be a personalized browsing experience, product recommendations, premium customer service, loyalty/rewards program, etc. How would you design and merchandise these privacy products? How would your brand’s new mission, vision, purpose, values, and culture influence the product design, execution, and governance?

If history is the best guide to the future, the third industrial revolution – the rise of digital technology – has shown that brands that use data in a trusted, transparent, privacy-first way to continuously adapt their products and services to meet the unmet needs of their consumers will be the brands that survive and thrive in what is likely soon to become a fourth industrial revolution.

Post-pandemic turbulence will continue to challenge organizational resilience and adaptivity effectiveness. The pace of change is not slowing down. The brands that start small, continuously experiment, learn, and evolve will be the ones that shape the next digital evolution.

Ben Nowikowski is a founding partner and CEO of Digital Evolution Partners Inc.